The only activity I had planned while in Seattle was a trip over to Bainbridge Island – Seattle’s own Martha’s Vineyard. I had read that the best (and cheapest) way to get across to the island was to ride the commuter ferry. For only $8.50 per person for a roundtrip ticket, you can catch the ferry for a lovely (if a bit chilly) 35-minute ride across Elliot Bay/Puget Sound. We hopped on the 8:45 ferry after first grabbing coffee at Storyville Coffee by Pike’s Place Market (a place that turned out to be one of our favorite coffee shops in Seattle). 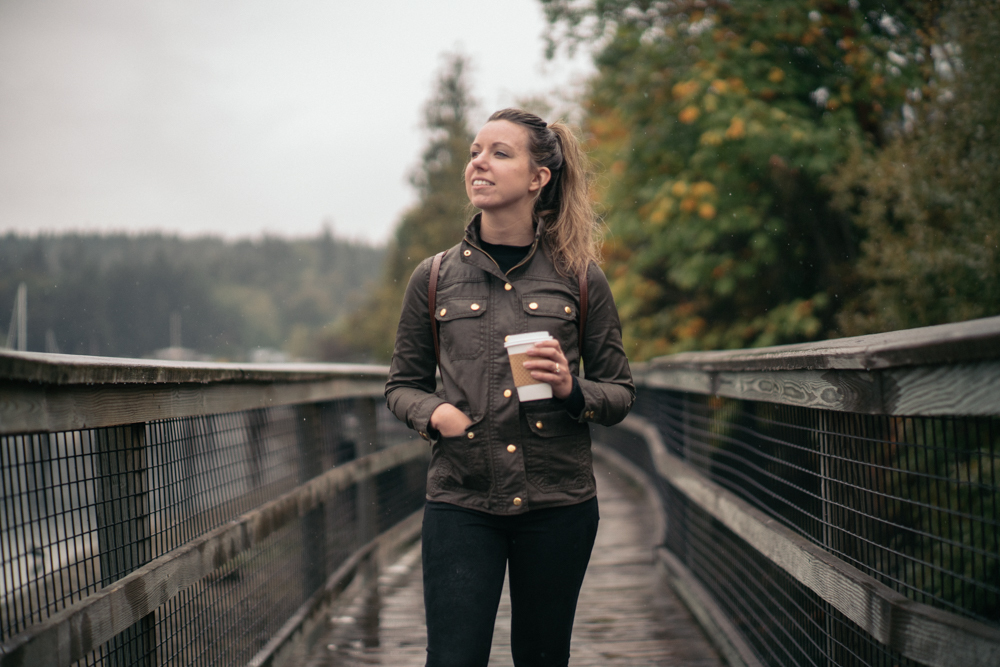 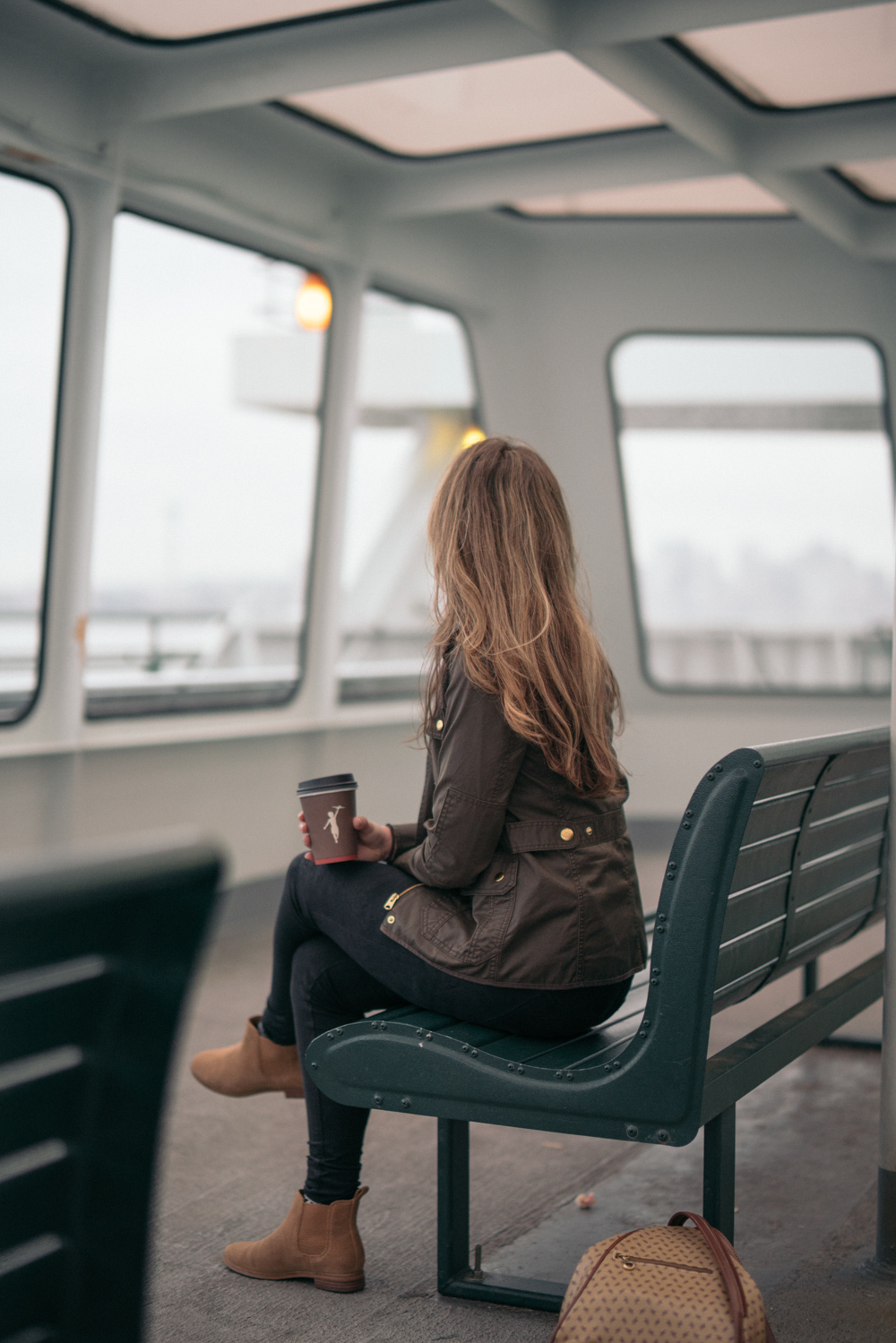 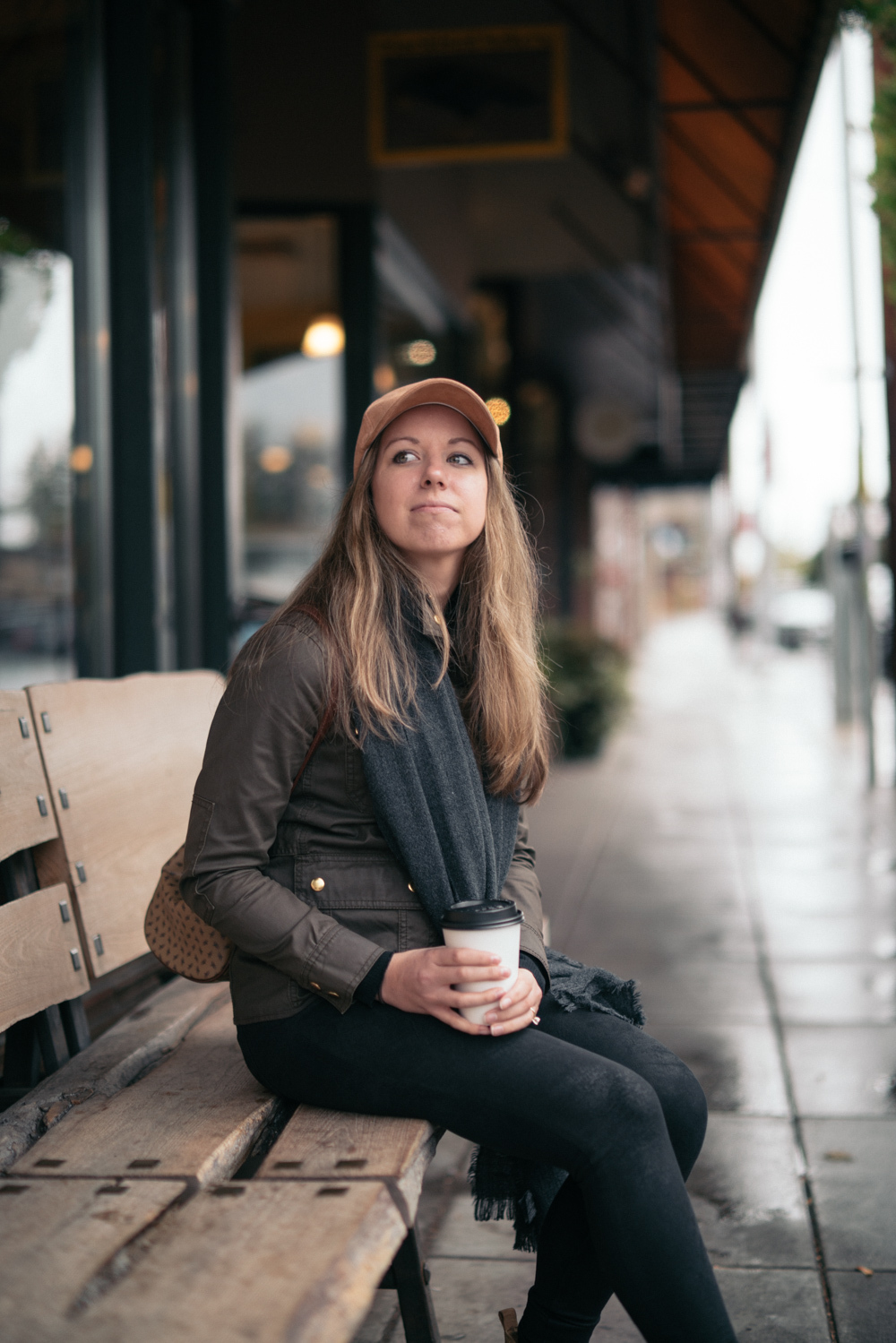 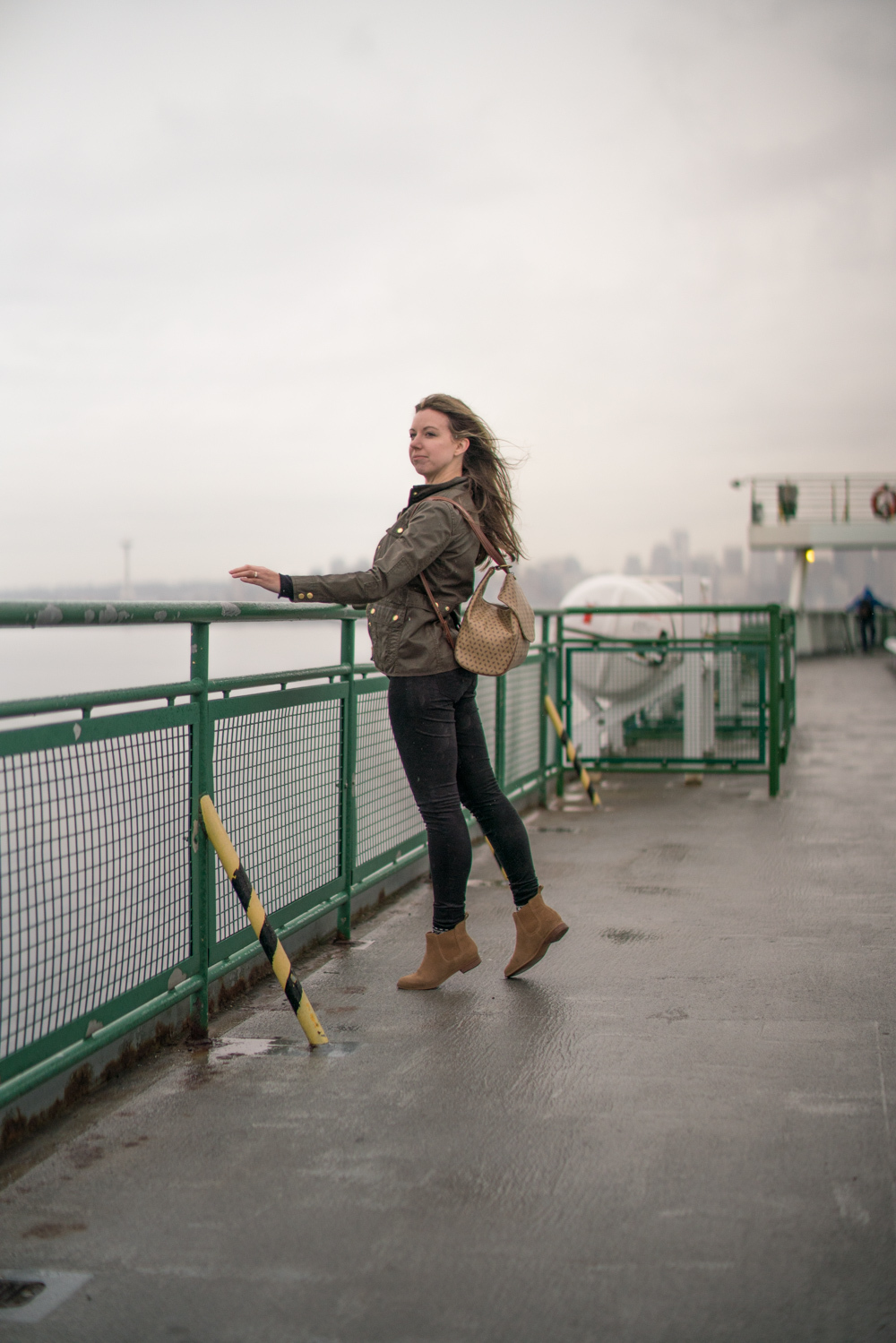 This time of the morning (after rush hour) the ferry was virtually empty so we enjoyed free range up on the top decks, ducking into the heated cabins when the wind got a little too vicious!

By 9:20 we were docked and walking off the ferry on Bainbridge Island but not before grabbing some spectacular shots of Seattle as we pulled away from the harbor! The day was a pretty typical one for fall in the Pacific Northwest – drizzling and chilly – but we didn’t let the weather get our spirits down (in fact we prefers that weather!) so we set out ready to explore the downtown and harbor areas of the darling island. 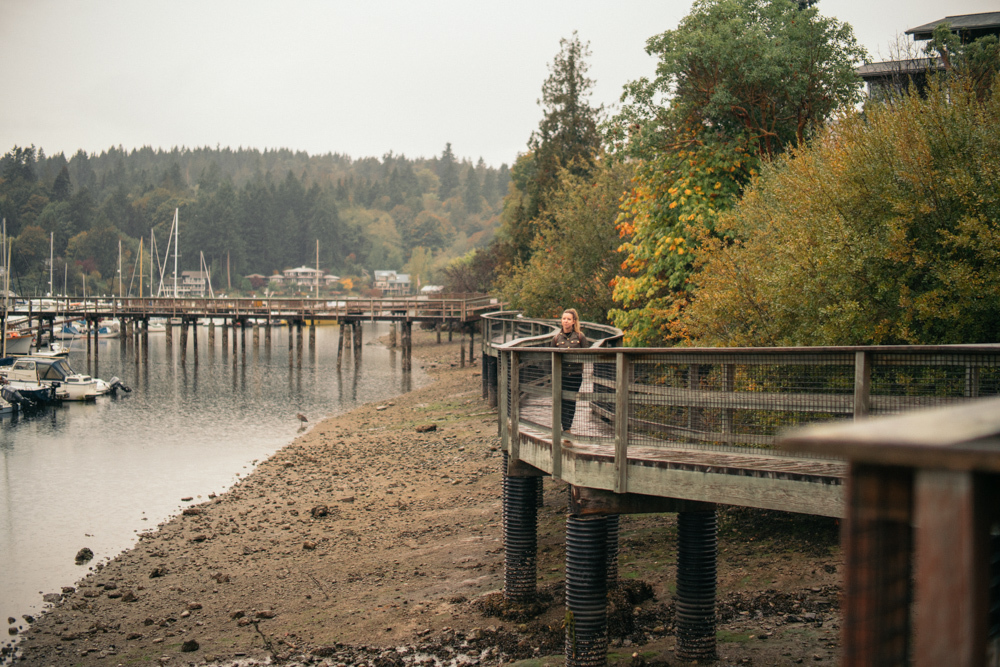 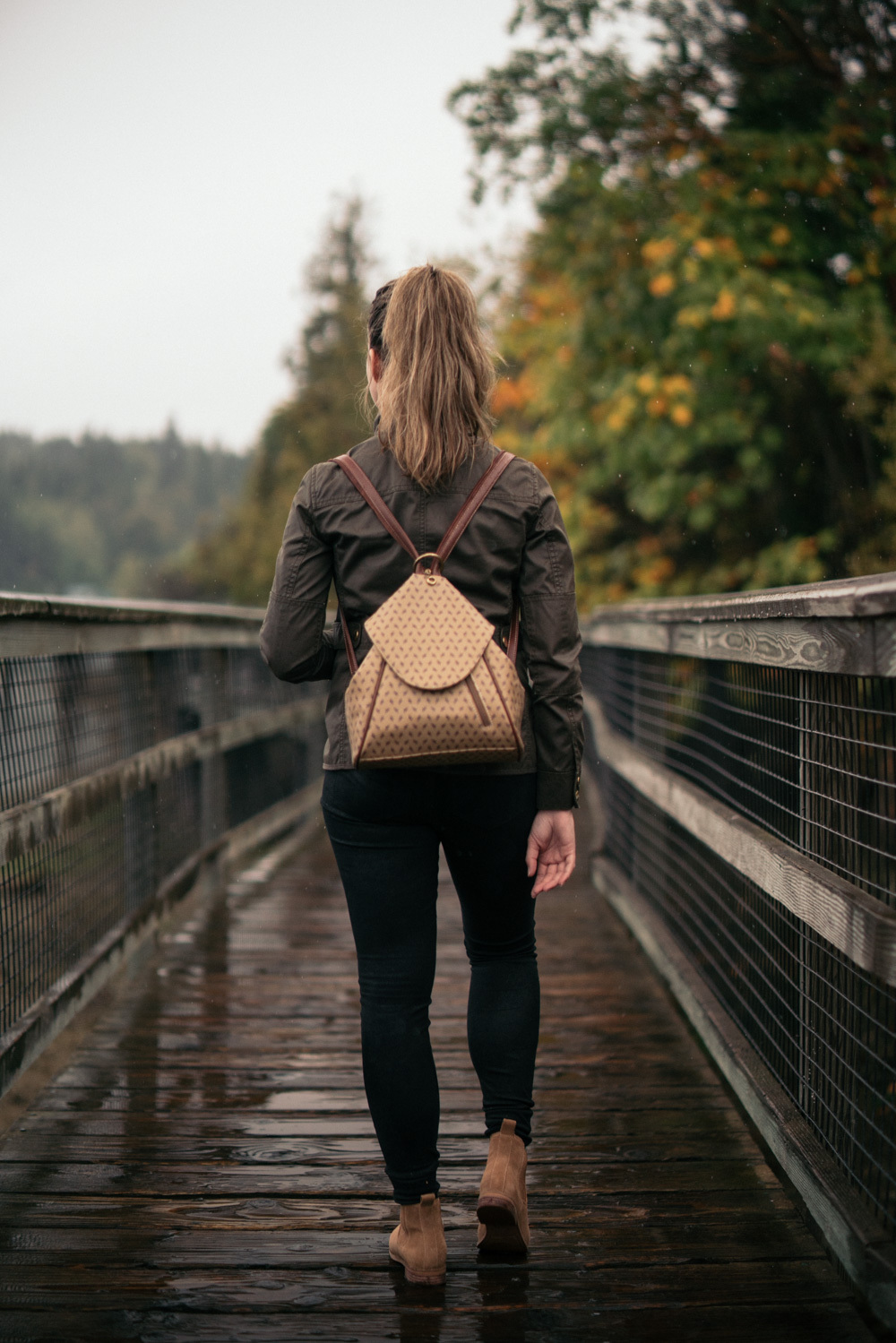 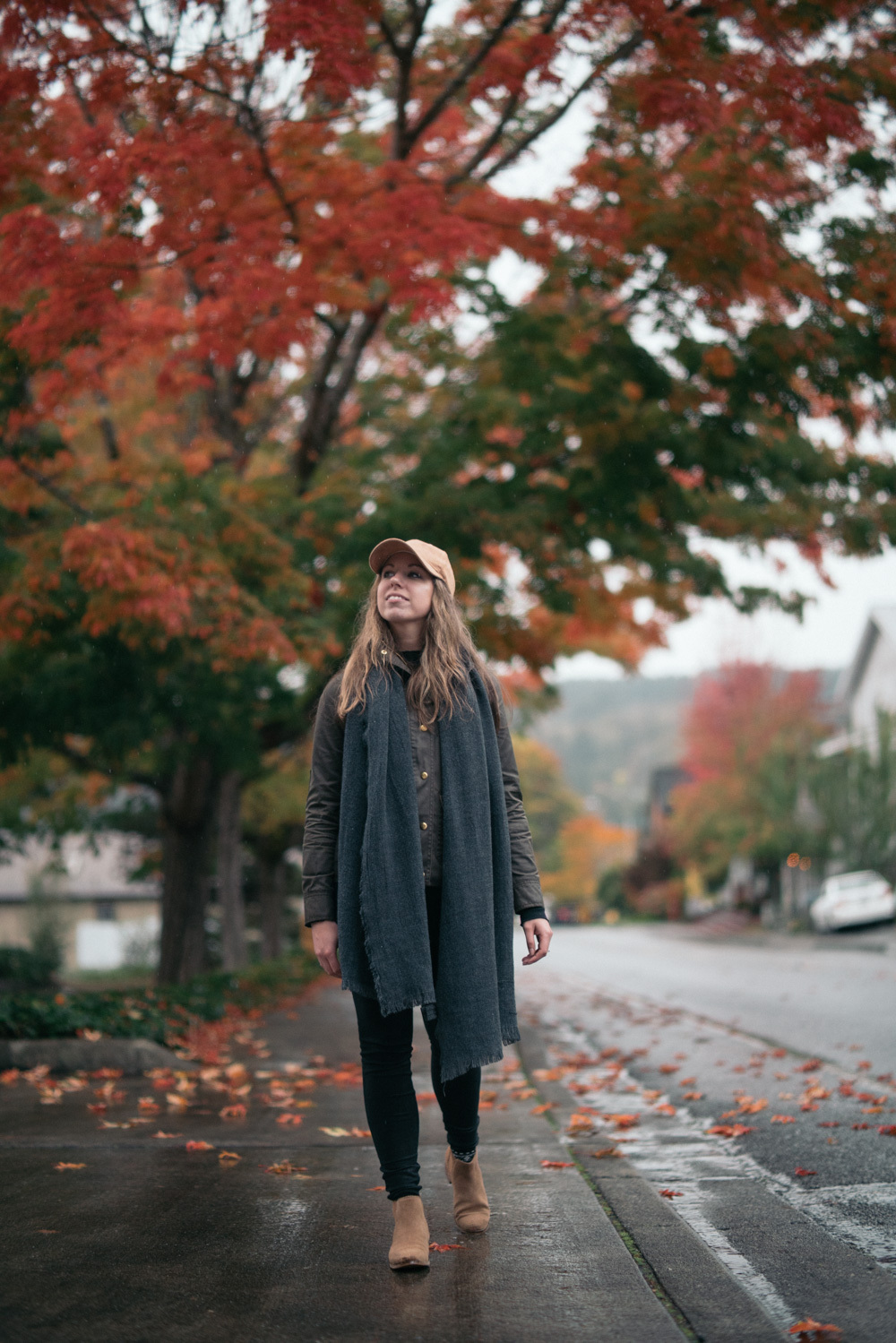 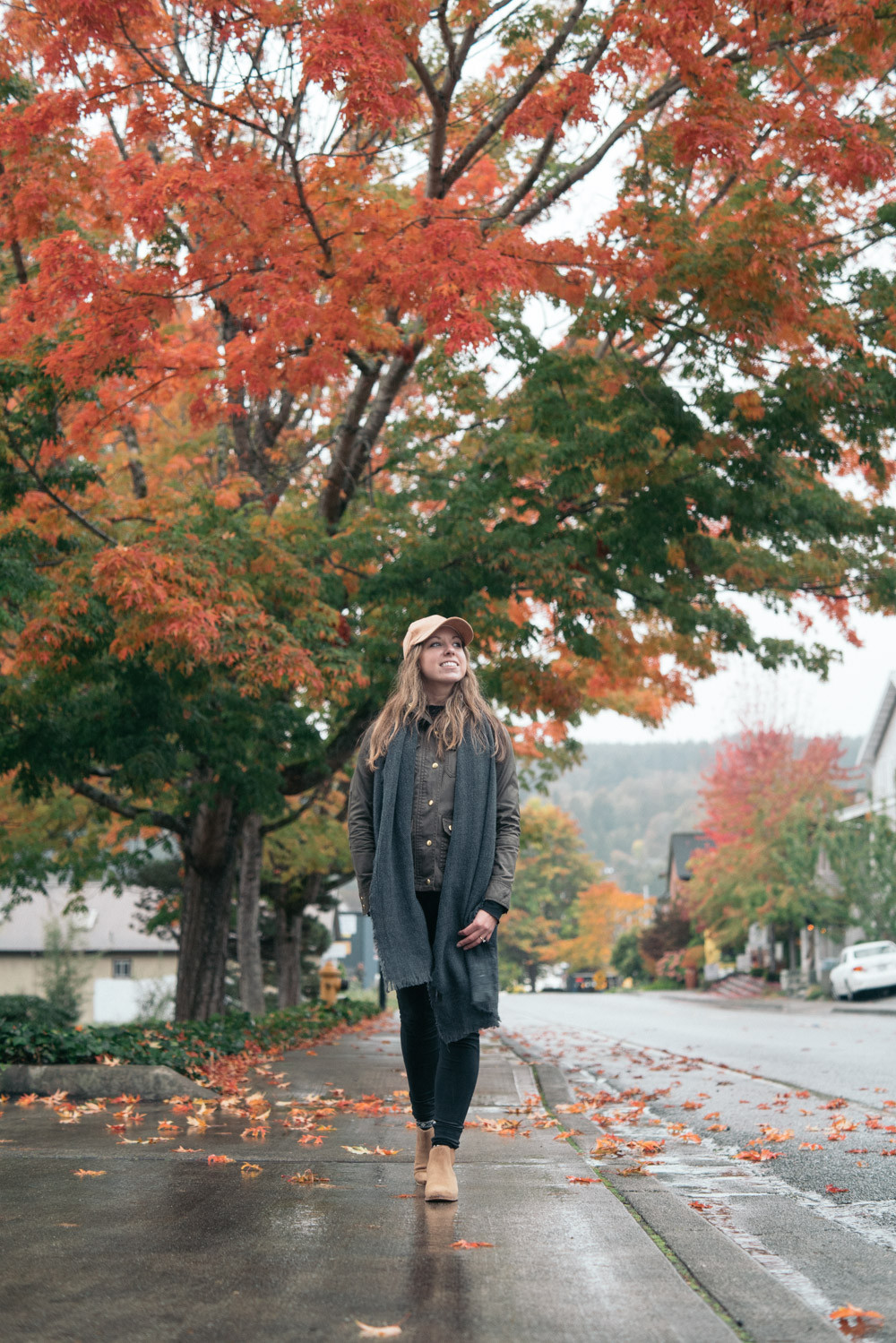 While most of the island is residential, you can rent a car to visit some of the parks but we opted to just walk the downtown and harbor which is an easy stroll from the ferry dock. A stop by Blackbird Bakery was a necessity for drip coffee to warm us up on the inside and then our search for fall foliage was on! As a girl who grew up in New England and spent many long weekends in quaint harbor towns, Bainbridge Island spoke to my soul.

The moment we stepped off the ferry we were hit in the face with the freshest air – the kind that takes your breath away because your body isn’t used to so little toxins. A salty ocean breeze mixed with the earthiness of the towering pines combined into a scent I wanted to bottle up and carry with me forever. 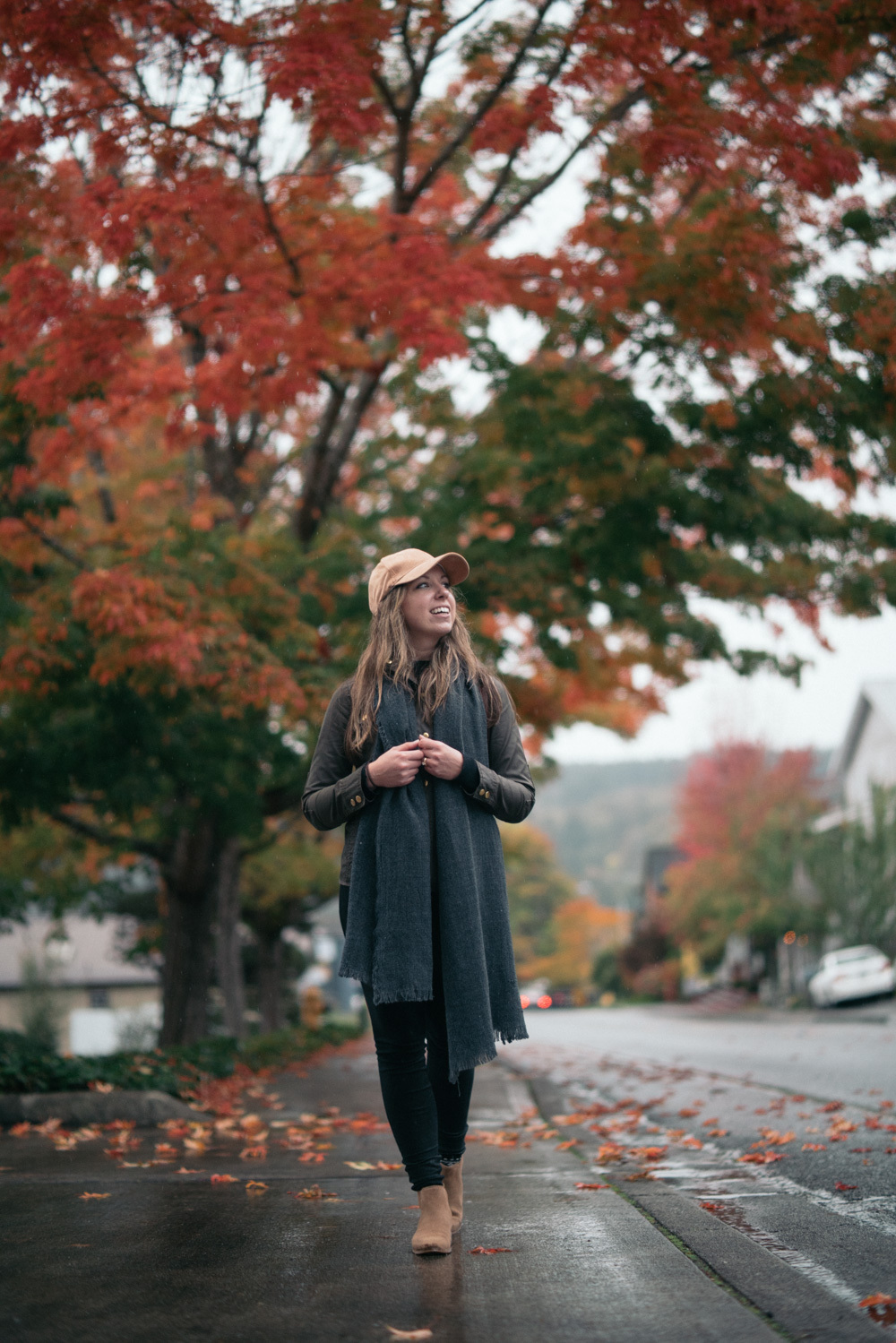 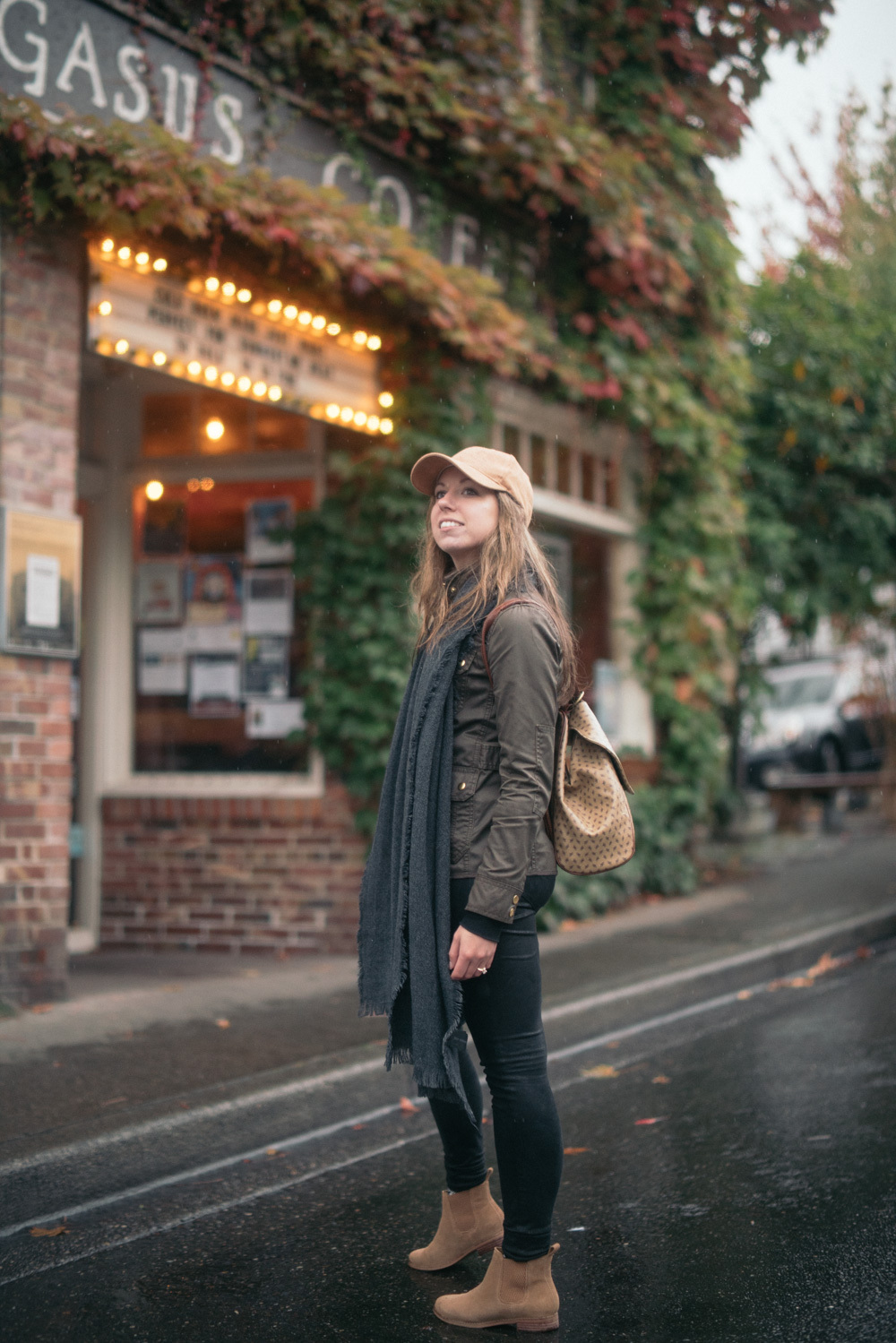 We ran across the Waterfront Trail that took us down along the water and to the harbor where we ran into the cutest shop called Pegasus Coffee and a number of small businesses and restaurants. It was raining quite a bit harder at this point (hence why you see I keep going from hair down to hat to ponytail ) but we hardly noticed!

When the steady rainfall turned into more of a drizzle we headed back toward the harbor for one of the most serene moments of the trip. We wondered the docks admiring both pleasure and working vessels and grabbing photos to remind us of the simple and spectacular moment where nothing else existed except the bobbing of the boats in the gentle current and the occasional call of the seagulls. 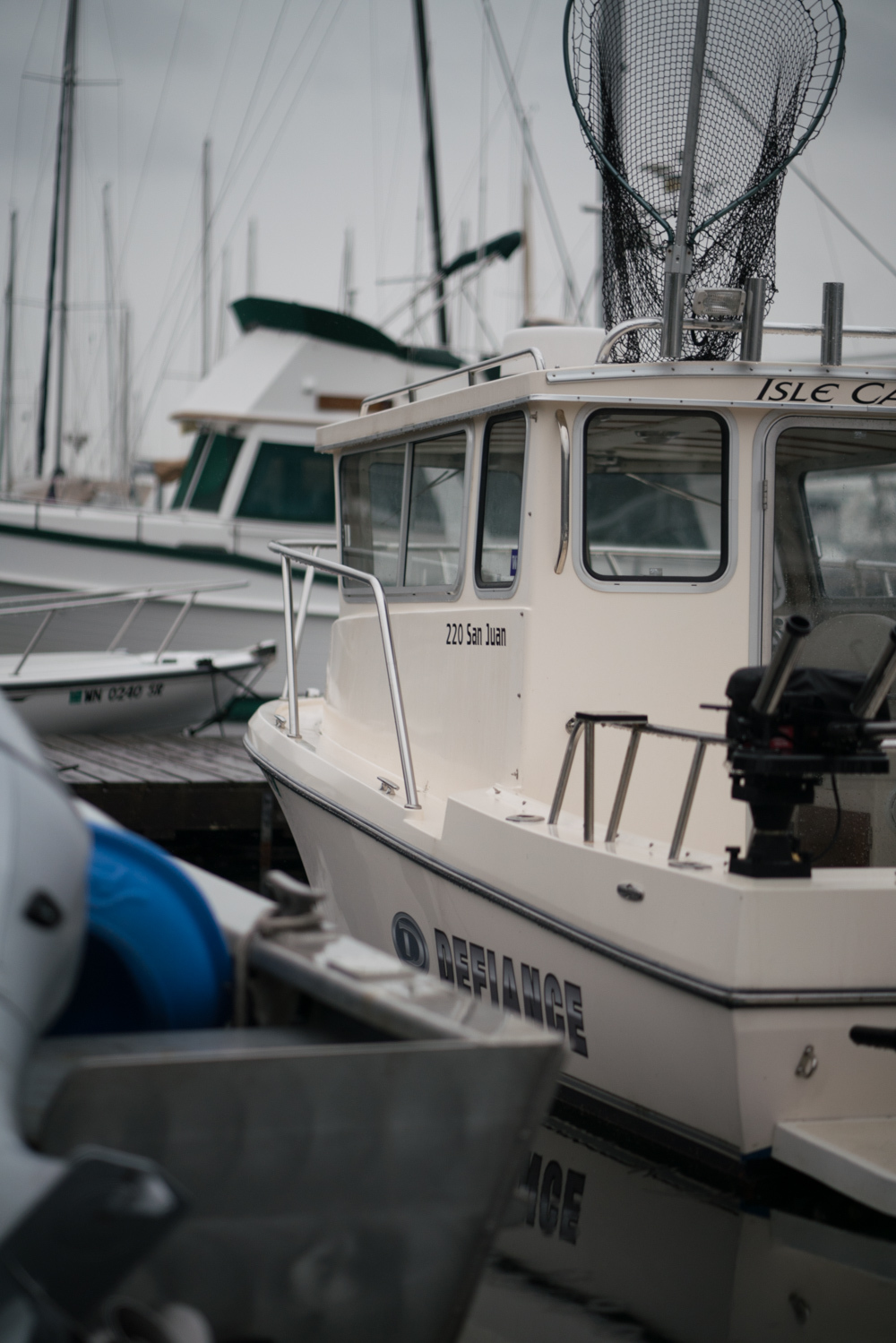 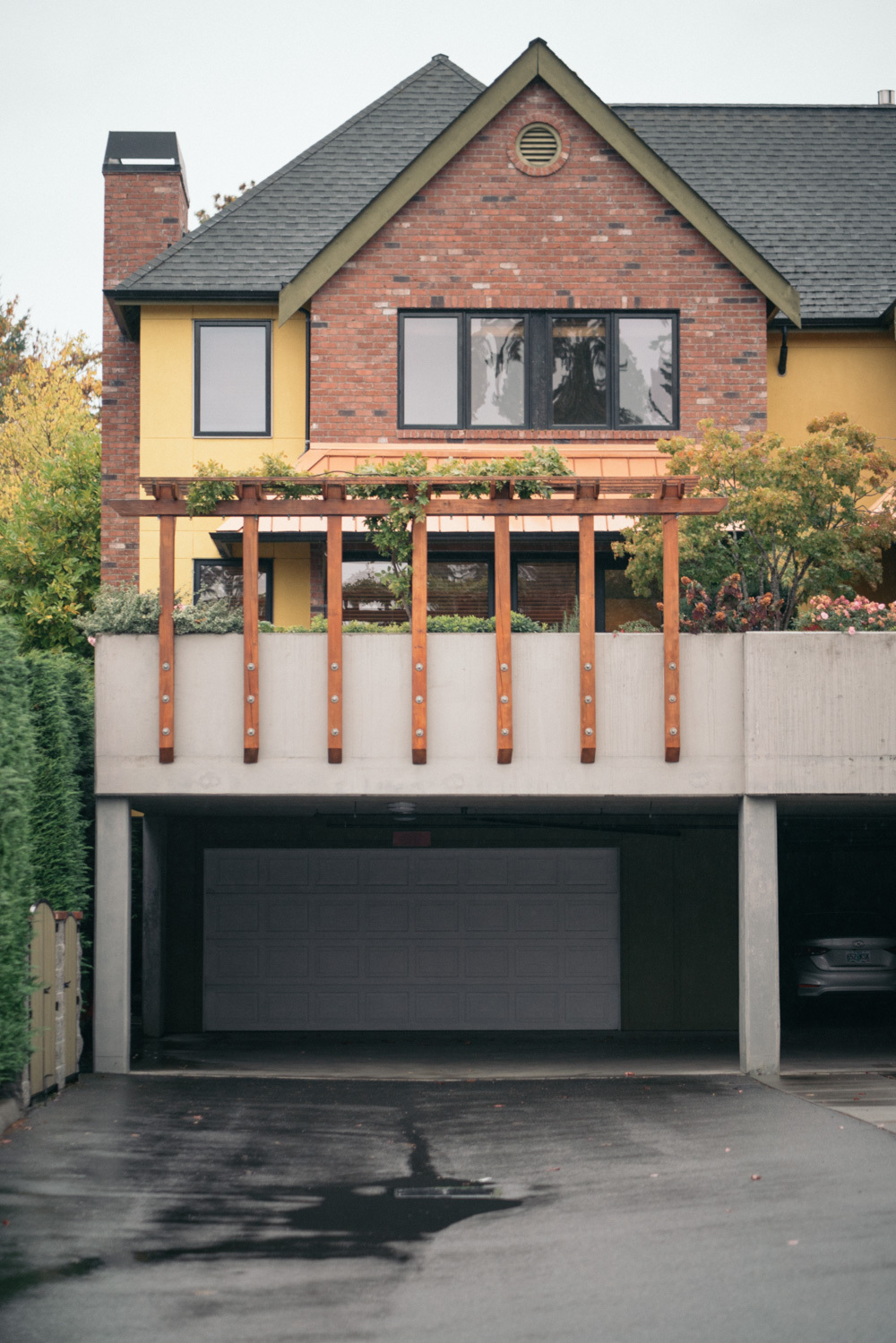 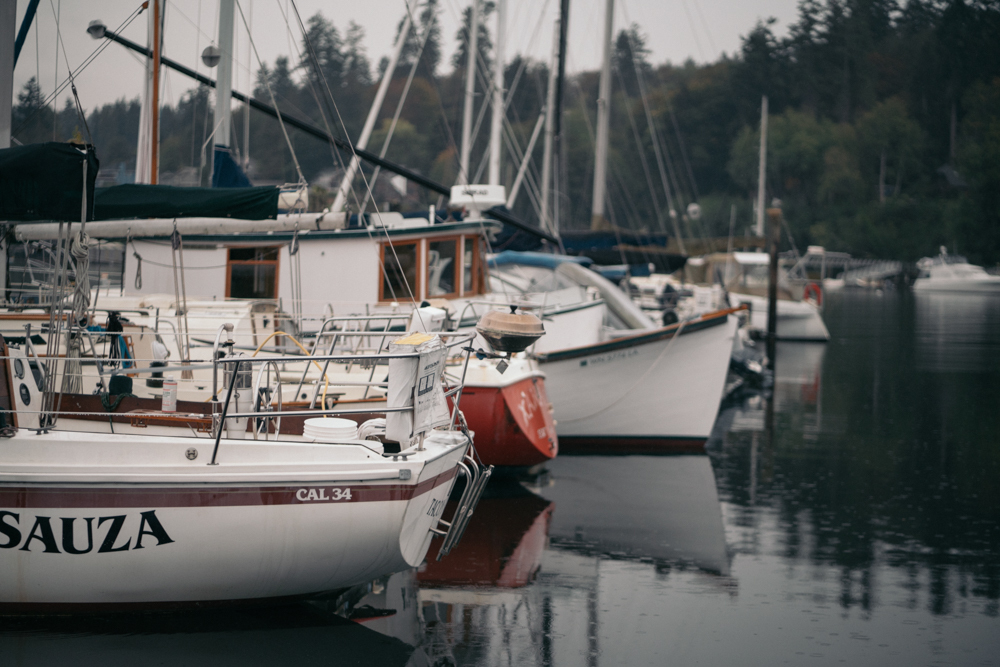 But all such moments must come to an end eventually and since lunch was beckoning and the rain was coming down steadily we headed back up to the main street to the delicious and warm Hitchcock Deli for sandwiches the size of our plates made with locally cured meats.

After lunch, we stopped in the cutest little stores and then decided to make our way back to catch the 1 pm ferry back to the city for another stop at Storyville Coffee and to our hotel warm up before heading back out dinner and a night stroll around the city!